Kim was diagnosed with Myelodysplastic Syndrome (MDS) a form of Leukaemia, at the beginning of 2010 and in 2011 was given 6 months to live without a bone marrow transplant. There were alternative chemo treatments (internationally, but not yet registered in South Africa) and way beyond the average person's means.

The Kimmy Fund (NPC - 2012/112276/08) was started at the end of 2011 to address the problems facing Leukaemia sufferers, where medical aids stop support, friends and families can't help and the financial burden of paying for tests, chemotherapy or medical aid shortfalls become a bigger problem than the cancer itself.

After sourcing and paying for a revolutionary chemotherapy that medical aid would not help with, Kimmy has not only defied her 6 month death sentence, she has gone into total remission and has dedicated herself to building The Kimmy Fund (a non-profit company) into a organisation that looks after people desperate for a little help. With funds already raised and funds we hope to continue to raise, we provide the kind of help that has already seen several leukaemia patients move away from weekly blood transfusions, others to remain on vital treatments and are giving them back some health, dignity and with your support a cancer free life.

We are often asked the question "Why the Kimmy Fund" and where does the "Sunflower Fund" fit in — The Sunflower Fund was formed in 1999 in support of the South African Bone Marrow Registry (SABMR) and was inspired by Chris Corlett and Darren Serebro's heroic struggle against leukaemia. It was formed by parents whose children had contracted leukaemia, and in some cases had lost their battle against it. Their aim was to secure financial support in order to increase the number of bone marrow stem cell donors in South Africa. Whilst supporting The Sunflower Fund completely (The Kimmy Fund has paid for several potential donors to get tested for the SABMR), we do not duplicate the good work The Sunflower Fund does but are rather add another dimension for Leukaemia patients by assisting financially where vital treatment is required.

2013 will be the year that sees The Kimmy Fund together with The Sunflower Fund working towards starting a support group for Leukaemia sufferers and their loved ones, as this is sorely missing.

The survival of The Kimmy Fund relies on annual Fundraisers and donors who not only donate financially but physically too by donating time, blood, platelets and bone marrow (stem cells). We will grow from strength to strength, with your continued support.

Just north of the fast paced business world of Sandton, Johannesburg lies the Indaba Hotel, Spa & Conference Centre nestled beneath the vista of the magnificent Magaliesberg Mountains.
It is a compelling blend of business-like convenience and efficiency, along with a relaxed and warm country hospitality atmosphere. 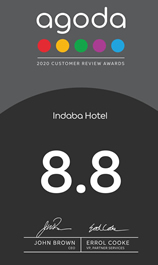